“Opera flamenca” and the first half of 20th century

Between 1920 and 1955, many flamenco shows took place in bullrings and theatres. These shows were known as “Opera Flamenca”.

It was so called because of an economic strategy as opera payed only 3% of taxes and shows paid 10%. In these years, Flamenco shows extended to the rest of the country and main cities in the world. As an inconvenience and due to the great commercial and social success, some much simpler and older palos were retired from the stage, giving way to some more graceful, for example, the cantes de ida y vuelta, cantiñas and fandangos.

In 1922, as a demand from purists, Manuel de Falla and Federico García Lorca organized a competition of cante jondo in Granada. The conceived flamenco as a folklore and not as a stage genre. They were worried as the deepest and purest roots of flamenco would be lost. That was the reason why they organized this competition where only fans participated. Cantiñas and festive songs were excluded. The jury was led by Antonio Chacón, an important image of flamenco at that time. Winners were “El Tenazas”, a former flamenco singer from Morón de la Frontera (Cadiz) and an 8 year- old boy from Seville, Manuel Ortega, known as “Manolo Caracol”.

The Generation of ’27 had some flamenco expert members, which helped flamenco to be a recognised as an art between intellectuals.

During the Spanish Post-War Era and the first years of Franco's regime, people regarded flamenco with suspicion since authorities were not sure if it was a good contribution for the national consciousness. Quickly, Franco adopted flamenco as one of the most important cultural manifestations in Spain. 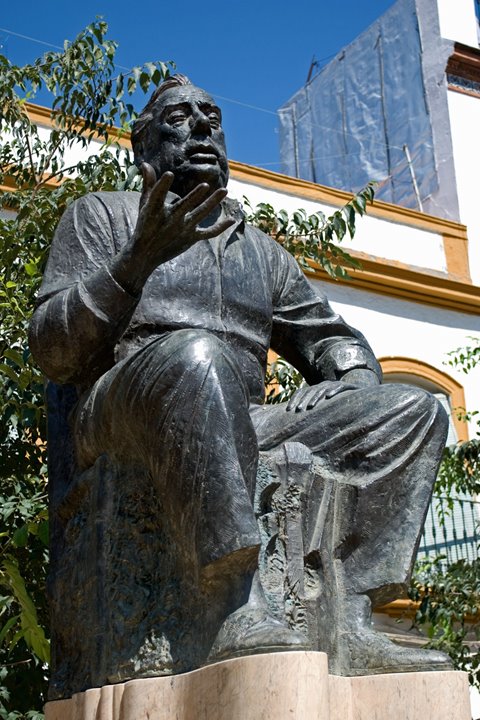 Monument to Manolo Caracol at the Alameda de Hércules (Seville).