The seventies was a period of political and social changes in Spain. It was a society very influenced by the different musical styles from Europa and United States. The combination of this factor with flamenco had as a result the Fusion flamenca.

Rocío Jurado was the singer who made flamenco international at the beginning of the seventies. She used to replace the bata de cola (flamenco dress) by a evening gown. Her versions of Fandangos de Huelva and Alegrías, and her perfect vocal tessiture were renowned all over the world. She used to sing with Tomatito and Enrique Melchor, both in Spain and in Venezuela, Colombia and Puerto Rico.

Jose Antonio Pulpón was a decisive musical representative of the fusion. He urged the flamenco singer Agujetas to work with the Andalusian rock band Smash and contributed to the artistic union between Paco de Lucía and Camarón de la Isla, who gave a boost of creativity to flamenco, being the definitve break with the conservativism of Mairena.

Camarón was a legendary flamenco singer due to his personality and art. Paco de Lucía was the responsible for the reconfiguration of flamenco music, the openness to new cultural influences such as jazz, Brazilian and Arabic music and the introduction of new instruments like the traverse flute or the “Peruvian cajón”.

Others important artists were Juan Peña, known as “El Lebrijano”, who combined flamenco and Al-Andalus music, and Enrique Morente, who mixed his own purity with rock.

In the 1980s, a new generation of artists was born, following the influence of the legendary Camarón, Morente and Paco de Lucía. These artists had an interest in popular urban music, which was called Movida madrileña. Some artists of this period were: Pata Negra, who mixed blues and rock; Ketama, with Cuban and pop inspiration, and Ray Heredia who gave flamenco a privileged position.

In the late 1980s and during the next decade, there was a new innovation in flamenco: Nuevo Flamenco (new flamenco). This style brought different musicians from orchestrated flamenco, rock, pop or Cuban music, which had flamenco in common. Important artists of this period are Rosario Flores or Malú (Paco de Lucía’s niece and Pepe de Lucía’s daughter) who has a very personal style of flamenco and is present in music industry due to her own merits.

The fact that “El Cigala” or José Mercé are famous flamenco singers makes that everything that they perform is called flamenco despite the differences from the classical flamenco.

Other artists and more contemporary groups such as O'Funkillo or Ojos de Brujo are in line with Diego Carrasco. They play musical styles different from flamenco, but respect the flamenco beat and metrics of some traditional palos.

Currently there is also a group of "academic flamenco singers" such as Miguel Poveda, Arcángel, Marina Heredia, Estrella Morente, Manuel Lombo or Mayte Martín. Without compromising the fusion and new flamenco, they sing in a more classic way, which means a return to flamenco origins.

In addition to its consolidation and continuous creation, flamenco is expanding worldwide. Maria del Mar Fernández made know flamenco in 2011 in India as she performed in the video clip for the film You won't get this life again, under the title of Señorita. The film was seen by more than 73 million viewers.

Every day is increasing the interest in the promotion of flamneco and spreading of its cultural and patrimonial values. So much so that there is an Andalusian Agency for the Development of Flamenco in the Culture Department of the Junta de Andalucía.

Currently, the City of Flamenco was created in Jerez de la Frontera, which will host the future National Center of Flamenco of the Ministry of Culture. From this institution will be ordered the initiatives that are carried out about flamenco.

One more fact: In Andalusia, flamenco can incorporate in compulsory education. 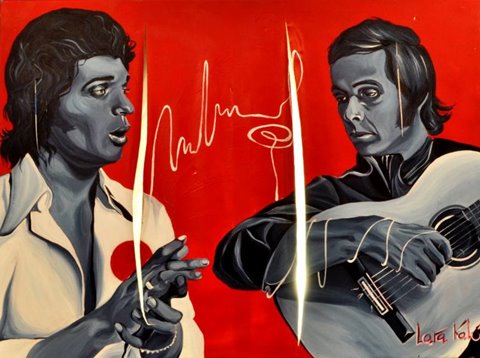